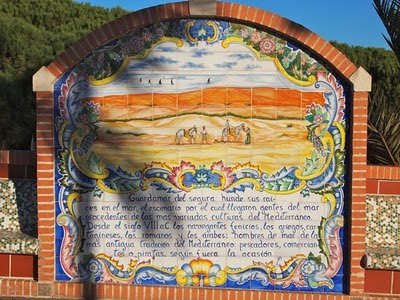 The eighth panel of tiles that we come across during our walk down the Paseo Ingeniero Mira takes us back to the early history of Guardamar. For a relatively small and unknown town, Guardamar has a long and rich history, well worth delving into more deeply than is the wont of the modern-day tourist, whose interests seem to be only in ephemera and alcohol (known colloquially as "a good time," it would seem). Little do these beer-bellied, tattooed specimens of northern culture realize that Guardamar has an extremely interesting Archaeological museum, and several archaeological digs that can be viewed by the public. And as for the Dama de Guardamar, why they've not even heard of the Dama de Elche, so what hope is there?

The roots of Guardamar del Segura reach into the sea, across which peoples arrived from very different Mediterranean cultures: Phoenician navigators already reached Guardamar in the 8th century B.C., followed by Greeks, Carthaginians, Romans and Arabs. Also the seamen of the Mediterranean: fishermen, merchants, and pirates, according to the season.

I am sure that the fishing vessel that can be seen in the background also has a special name in these parts, but I have yet to come across it. Interestingly, it is shown with sails partly raised, yet seems to be at anchor. Perhaps this is an attempt to depict the balmy weather we often experience in this area.The panel shows two donkeys, loaded with amphoras, presumably filled with either water or wine. Two men and a woman lead the donkeys, with one of the men actually riding the first donkey in what seems to be a most uncomfortable position. In the background, several triangular-masted vessels can be observed in the Mediterranean, perhaps coming from North Africa.
Posted by David at 18:41