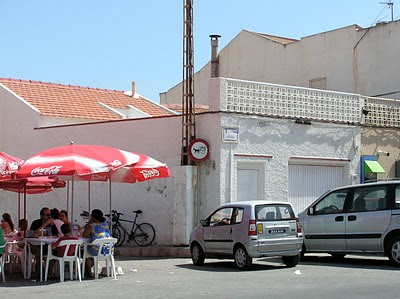 We have walked all the way down the Paseo Ingeniero Mira and have now arrived at the junction with the Avenida Europa, just before the beach. Across the junction, there is a small bar with a narrow, very short street that leads to the beach itself. Four years ago, at the end of August, 2006, I took the above photo of this location.
Little has changed since then, except for the sign that can be seen in the centre of the photograph. 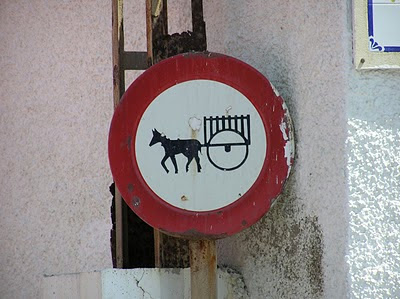 A few weeks ago, I noticed that the sign had been removed: the donkey had disappeared; the mule was missing; in a word, dear reader, the 'orse 'ad 'opped it!
Whether this was an official action, or the work of vandals, or even that of an over-zealous traffic-sign-collector, I am unable to say, but gone it was.
To be honest, I suspect that the disappearance is the work of officialdom: someone decided that there really was no more need for a sign prohibiting the entry of horse-drawn (or donkey-drawn, or mule-drawn) carts of the tumbril variety.
Anyway, the sign has gone, as, indeed, have such vehicles. We have been living here for four-and-a-half years now and have never seen a horse-drawn (or other quadruped-led) vehicle in anything but a festive environment, or as a means of enjoyment (a jingly-jangly horse-and-trap-like-affair occasionally passes the house of a Sunday), so perhaps there really is no need for such a sign any more.

Still, the loss of the sign is indicative of another part of old Spain that is disappearing, for better or for worse.