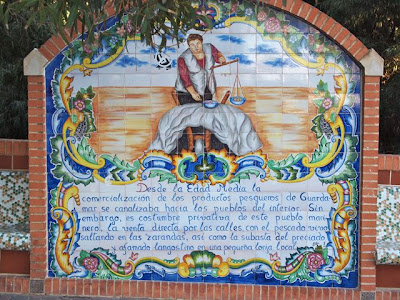 The tenth and final panel of tiles on the Paseo Ingeniero Mira is very special, as it shows an ancient activity that, although still carried out today, is likely to disappear in a few years.

Since the Middle Ages, the commercialization of fishing products from Guardamar has been carried out in villages further inland, However, the sale of fresh, often still live fish, in the streets of the village has remained an activity exclusive to Guardamar, where "zarandas" are used to transport the fish through the streets on handcarts. (A zaranda or saranda is a circular net structure, peculiar to this activity.) Guardamar also boasts an auction of its much-appreciated and renowned locally-caught large prawns in a small local fish-market.

One of the three remaining street-sellers is depicted in the illustration. She is using Roman scales to weigh her wares, which is exactly the way the fish is still sold in the streets of Guardamar. And it's not just tiddlers that are sold, as you might suppose from the illustration; the saranda's are often filled with dorada (a type of bream), barracuda, mackerel, octopus, squid, hake… though just what the duvet-like thing over the barrow is, I don't know, as normally one sees the saranda filled with wet fish, lying on the barrow. Read more about the fish-sellers of Guardamar in this earlier blog entry.
Posted by David at 13:16