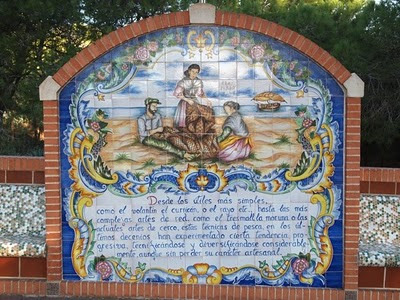 Tile panel number seven again shows an activity related to fishing. This time we see two women and a man on the beach, repairing some nets. The art of fishing has its own language and many of the words in the text that accompanies this drawing are not to be found in dictionaries (not even that of the Real Academia Español), at least not in this context, so translation is difficult, especially as I know zilch about fishing.

From the simplest implements, such as the multi-hooked line, the troll line and the "rayo" to the most complex use of nets, such as the "tresmall" (here the artist has used the Valencian word; in Castillian, it is called "tresmallo"), a fixed trap made up of three nets, the "moruna", a net specially designed for the capture of shrimp and prawn in coastal regions, and the currently used ringnets, fishing techniques have advanced considerably in the past decades, becoming much more technical and varied, whilst still retaining a certain artesanal aspect.

I am sure that the fishing vessel that can be seen in the background also has a special name in these parts, but I have yet to come across it. Interestingly, it is shown with sails partly raised, yet seems to be at anchor. Perhaps this is an attempt to depict the balmy weather we often experience in this area.
Posted by David at 15:11