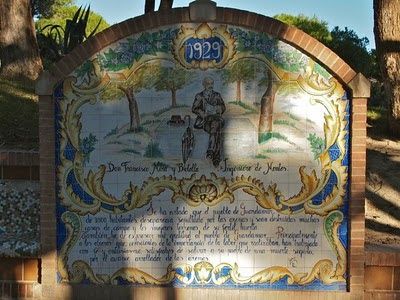 Tile panel number five in our walk down the Paseo Ingeniero Mira shows the great man himself, calmly reading his newspaper while sitting in the now fully planted dunes. His umbrella and hat are at his side, though I suspect his umbrella acted more as a parasol, given the weather we enjoy in Guardamar del Segura.

(Main text) Guardamar, a town of 3,000 inhabitants, has been saved from disappearing by being buried under the sand, with the associated destruction of many houses and the best fields of its fertile irrigated area.
I must also express my gratitude to the people of Guardamar, and especially to the workers, who, aware of the importance of the work they were carrying out, have worked with conviction and enthusiasm, content in saving their village from certain death, brought on by the overwhelming advance of the sands.

The text is largely Mira's own. The year shown at the top of the panel, 1929, is that in which Mira published an album of photos, together with a brief review of his work in Guardamar. By that time the main work had long been completed, but even today the struggle against the sand continues in Guardamar, using the principles developed by and learnt from Mira. The nursery (vivero) he set up to grow plants to be used in the replanting process still functions and can be visited. In addition to saving the village from being covered by sand, Mira's work also ensured the continuation of the small fishing fleet of Guardamar, as the management of the sand allowed continued access to the sea.

The original photograph of Engineer Mira y Botella, on which the tile panel is based, was taken in 1926. 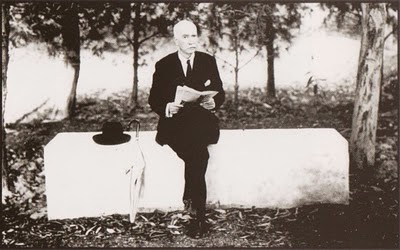