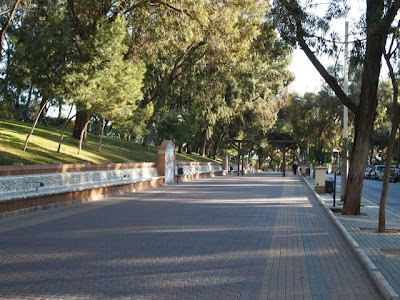 The Paseo Ingeniero Mira (Engineer Mira Avenue) is a pleasant avenue stretching from close to the main town square of Guardamar down to the beach, passing between two parks: the formal Parque Reina Sofia and the informal and much larger Parque Alfonso XIII.

The Paseo is named after the engineer who was responsible for developing and implementing the idea of using vegetation as a way to hold back the advancing sands, which were threatening to inundate Guardamar at the end of the 19th and start of the 20th centuries.

Apart from offering a shady walk, access to two parks and a direct link between the centre of the town and the beach, the Paseo also provides the visitor with a series of beautifully tiled panels. I suspect that most of the plebs who wander by are too dim to take any notice of these panels, but for those of you interested in rather more than sand and beer, I thought it might be a good idea to offer a photo and a translation of each panel. Hopefully, your visit to Guardamar will be richer for this and perhaps it will also help you better understand some of the culture history of the town.

The photo above is looking down the Paseo, from very close to the beginning (a kiosk prevents a decent photo from being taken at the very beginning, I'm sorry to say). The main elements of the Paseo can be identified: on each side is a green area, with the Parque Reina Sofia to the right and the Parque Alfonso XIII to the left; a parking area and the road is also to the right; in the centre of the image, the broad walkway, the actual Paseo, can be seen with, on its left side the mosaic benches and the panels about which we will soon learn more. Only four of the panels are visible in the photo (if you look hard enough), but there are ten in all, plus one smaller introductory panel, shown here. 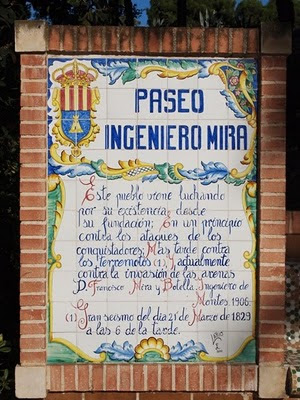 This introductory panel consists of 70 tiles and reads,

which I translate as

The people of this town have fought for its existence ever since its foundation, first against invading conquerors, later against earthquakes (the great quake of 21 March, 1829, at six o'clock in the afternoon), and now against the invasion of sand.

In coming entries, I shall look at each of the ten large panels in turn, as they are encountered walking down the Paseo towards the beach.

(Note that Google Maps does not indicate the Paseo itself, but marks the parallel road with two names (one in Castellano, the other Valenciano): Calle del Ingeniero Mira and Carrer del Enginyer Mira. Take your pick.)
Posted by David at 18:58